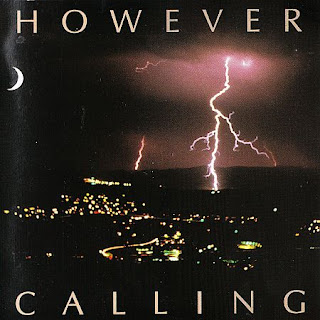 You wouldn't think a lot of good progressive rock would have come out in the United States in the 1980's, but if there's anything I know about music, its that there's an exception to every rule. In this case, a little-known bunch from Washington called However are the troublemakers at fault!

Blending jazzy Canterbury Scene-like quirkiness with things as disparate as New Wave and Pop, there's a certain magic to the sheer density of music contained within this hour plus LP, twenty tracks of varying strangeness, complexity and even beautiful accessibility when you might least expect it. Opener 'Orion' comes off as a punkish early Cocteau Twins number featuring liberal use of flute while another song such as 'Earthtime' will strike you as vintage Steve Roach with a twisted brimming in the darkness of distant drums and wailing sax. And when you have such brazenly well done stuff like that at ear, you will be struck at how fitting a record like Calling is for the mid 80's, yet at the same time a tantalizing product of great ideas which transcends the era of its birth.

This here is a recording of timeless, underrated wonder and wrought in excellence by occasionally disorienting contrast with each proceeding listen. I can't recommend it enough!

Posted by DrakeSinister at 9:29 PM