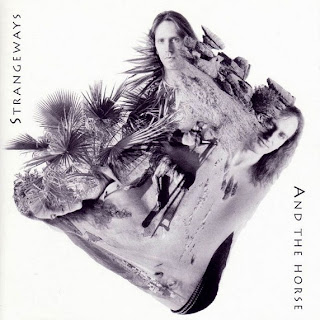 How is it that the single best hair metal/AOR band of the 1980's ends up making one of the best spacey-blues rock/alt. rock albums of the 90's?

Fuck if I know, but yeah...this is one hell of a record regardless of circumstances...specifically the fact that the band had originally been a 4-piece for their last two albums, AOR classics Native Sons from 1987 and Walk In The Fire from 1989. In the wake of their extraordinary Canadian lead vocalist Terry Brock jumping ship after the latter album though, the group brought in some guy named Munch for keyboard duty and had lead guitarist Ian Stewart take on the empty singer's mantle. Not an easy chair to sit methinks!

The results probably took this group's fanbase quite a while to get used to when the results of the lineup change ended up in a recording half a decade later in 1994. Gone are the anthemic crystalline gems that made Strangeways the ONLY band on the planet which could have redeemed arena rock and hair metal in the ears of the defranchised masses. Without Brock's charisma and in light of a vast, ever-changing musical climate, the band needed to rethink it's sound and what kind of music they wanted to write.

The result is almost too good to be believed. The band had always been atmospheric, but 1994's And The Horse takes this secondary aspect of the Strangeways sound and flushes it heavily with a whole new set of touchstones - The Cure, mid 90's Radiohead, early Eagles, Kyuss, the Britpop movement, nods to the newly emerged neo-psychedelic scene and even a wink to space rock pioneers such as Pink Floyd and Hawkwind. The result is a melancholic, lengthy and yet endlessly compelling amalgamation of much of what people loved about the less commercial side of the 90's.

It's hard for me to pick a favorite here on the whole - the swaggering opening number 'Precious Time' is the closest the album gets to single material: it comes across as the crux of a quieter Pulp butting heads with Simple Minds, which is awesome. Desert rockers 'Man's Maker' and 'Wonder How' slither along oh-so-laidback-like in equal measure, and even the 9-minute 'Some Of Us Lie' only demonstrates at how fantastic the Stewart brothers are at writing songs that gel in the mind and soul as they pass through you. For whether it was their prime AOR years in the late 80's or later, these guys wrote good fucking songs!

Underrated and among the classier exercises in blues-based atmosphere I've had the luck to encounter, And The Horse most certainly deserves a place in any one of yous' collections.

Posted by DrakeSinister at 8:28 PM